TURKEY IS A DIFFICULT ALLY!!! 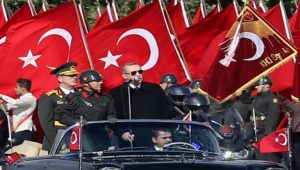 Merkel called Turkey and Erdogan a difficult ally we all have to live with, accept, finance and arm in order to use for our aims and targets, ie German targets.

THAT IS WHAT MERKEL TOLD US ALL ABOUT TURKEY, WITH NO SHAME, NO BLUSHING. TUrkey IS A DIFFICULT ALLY WHO IS ALLOWED TO SLEEP WITH RUSSIA AND USA AT THE SAME TIME, WHO IS FINANCED WITH BILLIONS OF EU BECAUSE OF REFUGEES TURKEY IS CREATING AND BECAUSE SERIOUSLY, TURKEY WILL BE THE BACKBONE OF THEIR EU ARMY THAT WILL IMPOSE ON EUROPE THE GERMAN DICTATORSHIP OF 21ST CENTURY.

Forget they occupy part of EU=Germany, it is Turkey our biggest ally!!

ERDOGAN THE MASTER AND PERSON WHO ORDERS THE AGENDA

Thus, the Turkish president has been ordering the agenda and foreign policies of EU=GERMANY, RUSSIA AND USA  and we are all told a story of unacceptable excuses.

EUROPE NEEDS TURKEY TO STOP RUSSIA BUT TURKEY IS MAKING LOVE WITH RUSSIA. THAT IS THE FACT MRS MERKEL. THAT IS ANOTHER GROSS FAILURE OF YOU AND THE STOOGES AROUND YOU.

TURKEY IS NEEDED FOR OUR NATO AND DEFENCE BUT IS ALREADY SLEEPING WITH RUSSIA USA, ALREADY MAKING A MOCKERY OF YOUR POLICIES IN MIDDLE EAST AND SYRIA AND ALREADY TOLD YOU , PISS OFF USA WE ARE TOO BIG TO LISTEN TO YOU IN OUR OWN HOUSEHOLD.

WONDERING WHY TURKEY HAS THE UPPER HAND!!!

The rubbish they tell us about FREEDOM and DEMOCRACY round the world is fiction. The garbage they use to persuade us that this is their aim is indeed so crude and so poisonous. Here they have a dictatorial regime in a country they need for global hegemony allowed to commit crimes that anywhere else they would send their armies to destroy:

GERMANY=EU HAS SO MANY ECONOMIC PROFITS DEALING WITH TURKEY THAT THEY ALLOW TURKEY TO OCCUPY HALF OF CYPRUS, COMMIT GENOCIDE AGAINST THE KURDISH PEOPLE IN TURKEY AND NOW INVADE SYRIA, COMMIT GENOCIDE AND ETHNIC CLAENSING INSIDE SYRIA AND THEY ARE ALL KEEPING QUIET AND ROLLING THE RED CARPET TO ERDOGAN.

WHAT CAN ONE SAY ABOUT THE LAMENTABLE POLICIES OF USA REGARDING TURKEY WHICH ARE SIMILAR TO EU=GERMANY’S?

THE WORLD CONDONES THE CRIMINAL ACTS OF TURKEY

Any crime anywhere has the culprit and its assistants. They are all condemned as criminals and all sentenced as criminals. Hitler died but his stooges were sentenced to death regardless because they were criminals like him.

Turkey is today the biggest criminal nation on the planet anyway you look at this nation. Either it is Erdogan today or any other president earlier, their actions as a nation are condemnable, punishable and abominable.

Yet, Turkey is never punished beyond empty words, never put in its place and now in a style of Western Cowboy Films, they invade another country, they pursue another genocide of Kurds and we are in the dark about what crimes they commit in Syria. Where are the reports of what is happening in Syria? Total black out, as it is Turkey!

Where are the reports of daily threats to Greece that will soon materialise and bring EU =Germany on a confrontation path with Turkey which we know will end up selling the Greeks in favour of the Turks. Not the first time, nor will be the last. But German dictators, go back to history and read because this is repetition. What will happen sooner than later, when Turkey overcomes Greece? Yes, the Balkans fall and here we go again to Vienna but I hope this time they reach Berlin.

Doomsday is coming but do not blame my writings. The writing is on the wall!!

THE SABOTEURS OF BRITISH DEMOCRACY ARE IN HOUSE OF COMMONS!!

THEY ASSURED US TO VOTE IN A REFERENDUM AND IF LEAVE WAS THE RESULT, WE LEAVE!! THAT WAS THE FUNDAMENTAL...

IT IS MY DUTY TO REPORT THIS FOR ALL CITIZENS OF EUROPE #MOLNUPIRAVIR IS APPROVED BY EU TO BE USED...